Daily living and commuting conditions have an immense impact on your wellbeing. This post is for people who live in a metropolitan area, have enough income to rent a place for themselves (with flatmates if needed), don’t have commitments that prohibit them from moving and, most importantly, are not satisfied with their commute time.

I want to describe why I came to a decision to rent a pricey apartment downtown. This is part of a series where I share my tools and thinking processes towards renting: from changing your mindset to apartment research to communication with your landlord.

Every extra minute of commute time reduces job satisfaction, reduces leisure time satisfaction, increases strain and reduces mental health.
[…]
An additional 10 minutes (each way) of commuting time is associated with the equivalent effect on job satisfaction as a 19% reduction in gross personal income.

I used to think of my 1h 10m (each way) commute as a needed tribute to adult values, something most of my college friends did (sometimes with much longer travel times), something inescapable. But studies similar to the one cited above and my own happiness being affected due to the mediocre use of these precious hours brought me to a realization: I want to live closer to the office.

Being thrifty can be an issue

There was one problem though — it was prohibitively expensive. Technically, I could afford it, but habituated with cheap living while spending less than half of my income, I just could not justify such an expense. The thought of the yearly cost of rent in the city filled my frugal self with outrage. That’s an unfair price! — I thought.

Could I be wrong? What if those hours spent commuting really are more valuable than even such a sizeable chunk of money?

How to make your long commute less stressful

So, how to overcome this bias and

My first approach was to answer a hypothetical like: “After 9 hours at work, Mr. Burns wants me to do some menial work for another hour. How much does he have to pay for me to be satisfied with this hour?”
That provided an amount of 12 000 ₽1 as a result. I had to revise the question immediately as the real situation was not so one-sided:
I enjoy reading on the tube, and I don’t mind a brisk walk of up to 20 minutes. So, the question had to change.

Turns out I was already asking myself a useful question before every Uber drive: “Am I willing to pay this amount for speed and comfort instead of using public transport?”
With that, I realized a better question to ask before commuting is: “How much am I willing to pay right now to be home/at work in 20 minutes?” I answered this question every day for two weeks and got a variety of results:

Some days I dreaded the tube, and some days it was more… acceptable.

The median price I was willing to pay per 50 commute-free minutes was nine times lower than the sum that my initial question provided. That’s 1350*60/50 = 1620 ₽ per hour of commute time saved. That applies to work days only, so to compare apples with apples, I’ll smear that number throughout an average month = 1620*22/30 = 1188 ₽. Let’s see what it will get me: 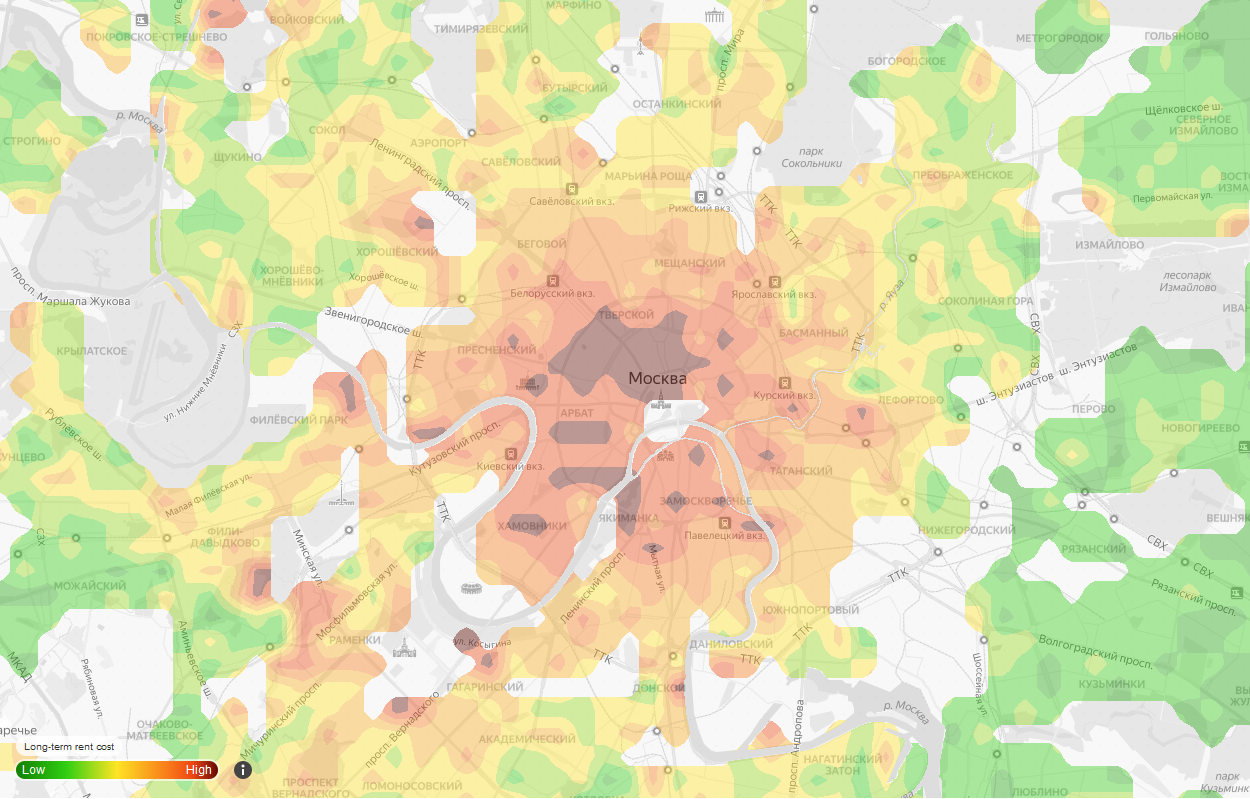 The price of renting is higher the closer you are to downtown, which is filled with offices and historic places.

The positive numbers in the last column mean that the price I’m willing to pay for a lesser commute is higher than the rent cost in the area that will provide said commute. What do you know, my frugal self can afford to live closer to the office!

…And that’s not even counting the opportunity costs of a long commute!

With that, making a decision is easy, I’m going to rent downtown!3 The next post is about how to approach selecting a neighborhood within an acceptable distance from your office.